The Průhonice Castle, together with the Průhonice Park, is a National Cultural Monument and a UNESCO World Heritage Site.

The Průhonice estate was purchased in 1800 by Count Johann Nepomuk of Nostitz-Rieneck, who began the extensive Classicist reconstruction of the castle. After Johann Nepomuk’s death in 1840, the estate was inherited by his son Albert and later passed on to Albert’s daughter Maria Antonia Gabriela. When Maria married Ernst Emanuel Silva-Tarouca in 1885, a new era dawned for the Průhonice estate.

“I wanted to build a castle, that reflected the character of the local countryside. It was not my place to construct a completely new building… you could say that the same structure could have been built anywhere in Bohemia four hundred years ago… it fits into the Czech landscape, it fits with beautiful old Prague which is so close.”

Arnošt Emanuel wanted to convert the modest Průhonice castle into a residence in the then fashionable neo-Renaissance style and entrusted the task to the 26-year-old architect J. Stibral, who was only six moths his senior, to the sculptor and decorator C. Klouček, the painter H. Schwaiger and the garden architect F. Thomayer.

Visitors enter the grounds through the main arched-gable gate by the guardhouse and immediately reach the Great Courtyard. The castle’s south wing, known as the “Small Castle”, was initially connected to the church via the conservatory, which was converted into an apartment in 1928. Its north front is adapted to the Romanesque facade, while the south front features an open terrace overlooking the Podzámecký Pond and is decorated with shields derived loosely from the motifs of Wallenstein Palace in Prague. The rest of the Small Castle is in neo-Renaissance style, richly decorated with sgraffito. The central part of the north façade attracts the visitor´s attention with its turreted gable (decorative, spiral) and its clock. 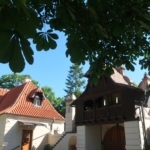 the main gate decorated with an arc shield 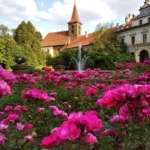 the Grand courtyard with a fountain 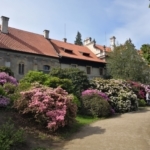 The Grand Castle, rebuilt from a Gothic castle, has a horseshoe-shaped ground plan. Architect Stibral had a part of the south wing demolished and turned the enclosed courtyard into a terrace with a breath-taking view of the Podzámecký Pond and the park. The facade of the Grand Castle has not changed significantly. The central facade, which originally ended in a simple triangular gable, was complemented with a complex structure that includes the figure of Assunta in a loggia with turrets on the sides and a lantern on the top. The masonry, however, has been left in its original state. The gate at the entrance to the courtyard is ornately decorated. 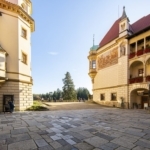 the Main terrace with a viewpoint 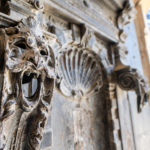 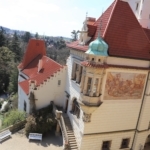 the fresco of St George

As you enter the Inner Courtyard, the first feature to command your attention is the stunning fresco of St George the Dragonslayer. Painted by Hanuš Schwaiger in 1892, it adorns the wall next to the oriel. It is Schwaiger´s largest fresco. To the left of the fresco is a statue of St Hubert by Celda Klouček. A second statue by the same sculptor can be found on the inner staircase of the Grand Castle. The opposite side with the windows of the Knights’ Hall, imitating the windows of the Old Chamber of Prague Castle, has a lunette cornice along painted coats of arms of local nobility with rusticated sgraffito and stepped shields. A fountain with a wrought-iron ornamental lattice, which is a copy of the fountain in the Small Market Square in Prague, stands under the arcaded galleries. Architect Stibral had the west wing of the castle connected with an extension of the old, newly modified headhouse, which is the real ornament of the western end of the promontory. The tower with a wooden base, which he built in the northwest corner of the castle building, is new and probably stands on the site of the former castle tower, which was gone during the Empire-style reconstruction.

the fresco in the cellar of the castle 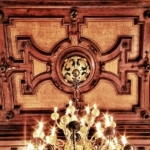 decorated ceiling in the Knight’s hall 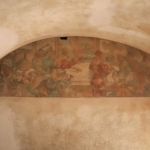 the fresco in the cellar of the castle

The interior of the castle is new having been renovated in 2010; only two tiled stoves have been preserved. One (in the Blue Lounge) is Baroque and consists of carved and colourfully decorated tiles. The other, from the end of the 18th century, is made of flat white tiles with figural décor, and is located in the Mirror Lounge. The castle cellars, carved into the rock, are not normally open to the public. They are partially restored, and some areas are decorated with small frescoes by Schwaiger. One of them depicts a Renaissance banquet, opposite to it is a humorous depiction of a tournament duel. The ceiling features Bacchus and Noah receiving a bunch of grapes from the Lord’s hand, and a Rococo drinking scene.

more from the history

The original Knights’ Hall is now used for commercial purposes as a conference centre. It is located on the first floor of the Grand Castle and can be hired for events.