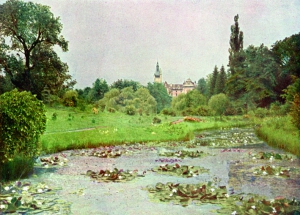 The park was founded by Count Arnošt Emanuel Silva-Tarouca in 1885. He began creating a park according to his own concept. He modelled the park after a park in Čechy pod Košířem, but mostly after the famous park of nobleman Pückler-Muskau on Nisa in Horní Lužice. The Průhonice Park was set up in the period when landscaping style peaked and similar parks in Europe were enriched with exotic plants. When it was created, the former forest and parts of fully grown woody plants were included. A framework was formed for newly introduced plants. Thanks to this some of the natural parts were preserved. In other places, woody plants served as protection or shading for new planting. The former vegetation became the basis of the outer parts; it was thickened by planting new kinds, especially spruce and Douglas fir trees. They were lovely to look at while also creating a natural windbreak. Appealing young trees were freed inside the forest and they slowly became valuable solitaires. Free arrangement is very typical for the park. Woody plants, tree and shrub groups alternate with meadows, ponds, streams and their dead meanders. The composition of the park is based on brilliantly selected vistas. They are usually ended by a dominant which is the Chateau in the first part of the park and groups of plants in the second one. The axis of the whole area is the stream Botič. Weirs, overflows and dead meanders were created on it and its tributaries. All these arrangements together with Podzámecký, Labeška and Bořín ponds transformed the landscape and improved the local climate. It increased humidity, influencing the growth of evergreens and rhododendrons. Thick nets of track lead in natural curves; following local terrain and leading to viewpoints that are arranged elegantly and with great skill. There are uniquely placed groupings of woody plants and different plants are used to create something like stairs. The founder took advantage of the changeability of seasons. Especially of their colours during sprouting, in blossom or when changing colours of their leaves in autumn. There are no geometric shapes here with the exception of the regularly designed part of the Large Courtyard. Průhonice Park is the most significant landscape element in Europe. The combination of native and introduced woody species is unique. For lots of them, Průhonice Park became the entrance gate to Bohemia and also to whole Europe. 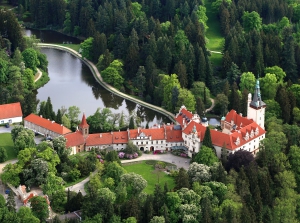